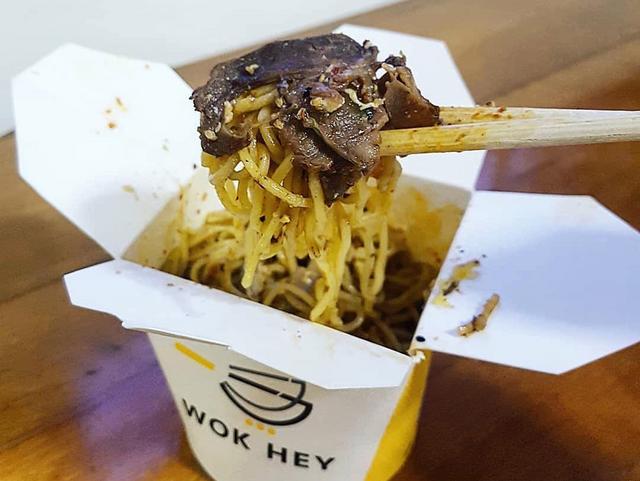 the taste does justice to its name. quality for any dish. but can be improved on having less msg. meat can be improved / cooked separately but thats not in their process. waiting time is really long so u need to pre order via app. service can def be improved

Good stuff from Wok Hey. Their chefs whip up numerous boxes of fried rice each day. We tend to order less salt and add extra vegetables for a more balanced meal. During peak hours, you might have to wait quite a bit. Order early to avoid disappointment. We ordered at 6 plus pm and had to wait about 40 minutes.

Absolutely worth the wait, really great food. Thanks so much!

Earlier this afternoon, I placed my Grab order GF-237T (via self pickup) under this outlet. When one of the staff there was about to hand over my supposedly food order (that was ready) to me, I sought confirmation from him on whether was the food order meant to be mine as he did not paste the order receipt (which clearly indicates my Grab self-pick up order number) on the food packaging & instead, just like that, he straight away passed me the food order & as a result, I'm unable to tell that whether the food order was meant for me. He responded to me, in an impolite manner, saying that the food order was indeed meant to be mine & after which, at a very last minute, he decided to paste the said Grab order receipt on the food packaging instead. Subsequently, I received a rude shock from him, that is, he persisted me to show me the order ID to him & judging by his body language, it seems to me that the motive of him requesting such is that he disbelieve in my earlier response, which is, specifically, that I've clearly pointed my index finger, what more in his presence, towards the physical Grab order receipt, bearing the very same order ID as I'm expecting to collect it, that was pasted on the outlet's transparent glass panel (that separates the cashier counter & the cooking area) after he asked me on whether have I placed my order over the counter. Bear in mind that during that very period of time, that was the only Grab receipt, which appears to be an order of mine, being pasted on the said transparent glass panel. In other words, I did implied to him that I was there to pick up that very particular order that I placed on the Grab app, when he was about to take my order over the counter as he initally though that I've yet to place my order. In response to the staff's persistence of me having to show my order ID to him, I told him off that prior to that, I've clearly, in his presence, pointed my index finger towards that very said Grab receipt, indicating that I was there to collect that very order. I hope that the management of the said outlet will look into this matter & such unbecoming experience like this will never happen again should I decide to place my order from this very outlet in the future.

feel like im eating plain rice. no taste. should balance the salt. my food was prepared by one chinese lady. im a wok hey lover but.... its terrible.